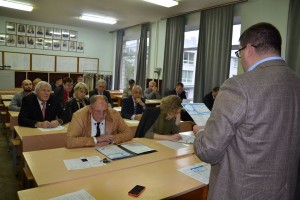 October 5, 2016 at KNUCA was a round table on the theme: “Organization of workshops and trainings in KNUCA”. During the meeting there were discussed the stages of realization of the project “GameHub: University-enterprises cooperation in game industry in Ukraine” 561728-EPP-1-2015-1-ES-EPPKA2-CBHE-JP in the part of organizing and conducting trainings in KNUCA with the participation of representatives of European universities-partners of the project. 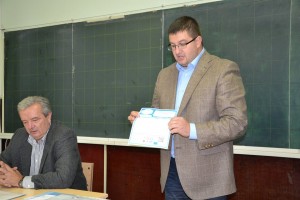 A round table was held in the framework of the meeting of the Scientific Council of the faculty of Automation and Information Technology, which was attended by dean I.V. Rusan and, all Deputy Dean, heads of eight departments, as well as scientists and secretaries, professors and representatives of the student government. The moderator of the meeting was professor of the department of Information Technology A. O. Biloshchytsʹkyy. During the roundtable a lively discussion was held. In addition to the question of training, the participants found the interest of the progress of the implementation and promotion of the project “GameHub”, its prospects for the faculty and the university in general.